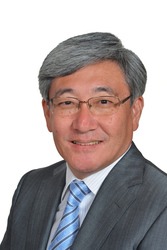 Takeshi graduated from Kobe University of Mercantile Marine in 1980 with the Bachelor of Science in Marine Engineering. He then worked for the Institute for Sea Training of Japan’s Ministry of Transport as a training instructor in Marine Engineering. During his 7 years of life at sea, he obtained a Chief Engineers’ license.

In 1987, he returned to his alma mater as a research associate of the department of Marine Engineering. After obtaining his Ph.D. in mechanical engineering, he had opportunities to stay in the department of Mechanical Engineering at the University of Saskatchewan as a research fellow in 1996 and at the World Maritime University as the associate professor of the specialization of Maritime Education and Training from 1997 to 1999.

Since the end of 2012, he has been assigned as the Executive Director of the International Association of Maritime Universities.