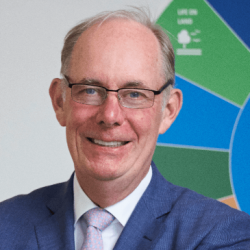 Professor Ronan Long is Director of the WMU-Sasakawa Global Ocean Institute and holds the Nippon Foundation Professorial Chair of Ocean Governance and the Law of the Sea. He lectures on a broad range of ocean governance subjects including: the law of the sea, the law of climate change, as well as on multilateral diplomacy and dispute resolution. Previous appointments include a Personal Professorship and the Jean Monnet Chair of European Law at the National University of Ireland Galway, a Visiting Scholar at the Center for Oceans Law and Policy, University of Virginia School of Law and a Senior Distinguished Scholar-in-Residence, Law of the Sea Institute, Berkeley Law, University of California, faculty at the Rhodes Academy Oceans Law and Policy, as well as the United Nations – The Nippon Foundation of Japan Fellowship Programme. In the latter capacity, he has co-supervised mid-career legal professionals from Bangladesh, Mozambique, Myanmar, Guatemala, Sierra Leone, Costa Rica, Namibia and Nigeria. He has a longstanding working relationship with the Korean Maritime Institute including faculty membership of the Yeosu Academy of the Law of the Sea. Additionally, he teaches on the Law of the Sea programme at Harvard Law School.

Professor Long has participated on the European Union and the Irish delegations at a number of international fora dealing with the law of the sea including the United Nations and was Ireland’s representative at UNESCO /IOC Advisory Body of Experts of the Law of the Sea. He has acted as an adviser/consultant on oceans law and policy issues and undertaken commissioned work for foreign governments, the European Commission, as well as for public and private bodies including the OSPAR Commission, the Office of Legal Affairs at the United Nations, the International Hydrographic Organization, the International Council for the Exploration of the Seas, the North-Sea Regional Advisory Council, the Government of Scotland, and the Forum Fisheries Agency in the Pacific.

With over 20 years’ leadership experience in EU research programmes, Professor Long is participating in the MERCES Project in conjunction with 17 European partners, which is aimed at providing the EU with new, ecologically and economically sustainable protocols for the restoration of threatened and damaged marine ecosystems. He is also a member of the ATLAS consortium forming a dynamic new partnership between multinational industries, SMEs, governments and academia to assess the Atlantic’s deep-sea ecosystems and marine genetic resources. His current research interests are focused on regulatory and governance arrangements pertaining to the restoration of marine biodiversity, ecosystem-based management, the law of climate change, as well as human rights in the maritime domain. During his career in the Irish Naval Service, he won an academic prize at Britannia Royal Naval College and held a number of appointments ashore and afloat, including membership of the Navy’s elite diving unit. As a keen yachtsman, he has represented Ireland at the top competitive level in offshore racing, including spending a memorable year on board NCB Ireland in the work-up programme for the Round the World Race in 1989, and was a regular crew member on Moonduster in the 1980s.