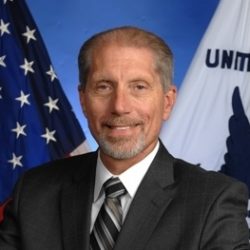 Mr. Jeff Lantz is Director, Commercial Regulations and Standards for the Coast Guard’s Assistant Commandant for Prevention Policy.  His responsibilities include the development of U.S. maritime safety, security and environmental protection regulations and policies as well as the U.S. merchant mariner credentialing program.  He leads for the U.S. in the development of international safety, security and environmental protection standards at the International Maritime Organization (IMO) and represents the U.S. at the IMO in many capacities including as head of delegation to both the Maritime Safety Committee and Marine Environmental Protection Committee.  Mr. Lantz is a member of the Board of Governors for the World Maritime University. Prior to his current position, Mr. Lantz served on active duty in the U.S. Coast Guard, reaching the rank of Captain. He graduated from the U.S. Coast Guard Academy and later the University of Michigan, where he obtained advanced degrees in Naval Architecture and Marine Engineering and Mechanical Engineering.