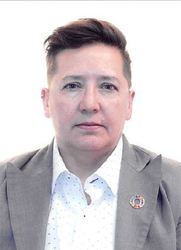 Born in Saint Boniface, Manitoba, Canada, Ms. Sauvé is currently acting as Director General of External Relations Directorate of Fisheries and Oceans Canada. She started her three-decade career in the Government of Canada as a biologist at Fisheries and Oceans Canada. Ms. Sauvé represents Canada at numerous multilateral negotiations in marine biodiversity and ocean governance. In 2018, Ms. Sauvé was Head of the Canadian Secretariat of the November Sustainable Blue Economy Conference held in Nairobi, co-hosted by the Government of Canada. In 2017, she was Canada’s lead negotiator for the UN Ocean Conference “Call to Action” outcome document, as well as for the marine component of the 2002 World Summit of Sustainable Development.  Ms. Sauvé also led Canada’s engagement in the Convention on Biological Diversity on marine issues. From 2014-2019, Ms. Sauvé served as international Chair of the Arctic Council Working Group for the Protections of Arctic and Marine Environment (PAME).

From 1994 to 2000, Ms. Sauvé was a Foreign Service Officer in Canada’s Department of Foreign Affairs and International Trade.  While there, she represented Canada in international fora, including UN Headquarters (New York) and UN Environment Program (Nairobi) on international environmental policy related to freshwater, marine and wildlife management files. In 1999 she was seconded to advise the provincial Government of British Columbia on the international export of bulk freshwater. Ms. Sauvé holds a BSc degree in Natural Sciences from the University of Manitoba (1985) and resides in Ottawa, Canada with her family.