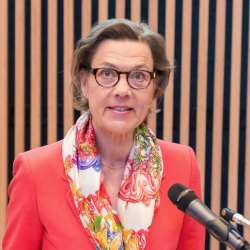 Ambassador Marie Jacobsson is the Principal Legal Adviser on International Law at the Swedish Ministry for Foreign Affairs. She was a Member of the UN International Law Commission (ILC) from 2007-2016 and appointed Special Rapporteur for the topic, Protection of the Environment in Relation to Armed Conflicts in 2013. Jacobsson has served at the Legal Department of the Ministry for Foreign Affairs since 1987. Before that, she held a position at the Swedish Defence Staff as adviser on security policy matters. In 2016 she was appointed Special Representative for Inclusive Peace Process. Her present assignments include designation as arbitrator under Permanent Court of Arbitration, UN Convention on the Law of the Sea, the Protocol on Environmental Protection to the Antarctic Treaty and as alternate Arbitrator, Court of Conciliation and Arbitration within the OSCE.