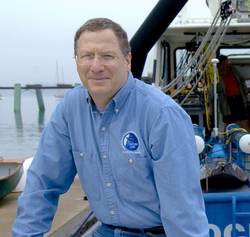 He is the recipient of the Keen Medal for Marine Geology and an Honorary Doctorate from the University of Stockholm. He was a member of the President’s Panel on Ocean Exploration, chaired a National Academy of Science Committee on national needs for coastal mapping and charting as well as the recently completed National Academies report on the impact of the Deepwater Horizon Spill on ecosystem services in the Gulf of Mexico. He was the co-chair of the NOAA’s Ocean Exploration Advisory Working Group, the Vice-Chair of the Consortium of Ocean Leadership’s Board of Trustees, and is currently the Chair of the National Academies of Science’s Oceans Studies Board, a member of the State Dept.’s Extended Continental Shelf Task Force and the Navy’s SCICEX Advisory Committee. In 2016 Larry was appointed by President Obama to the Arctic Research Commission, was elected to the National Academy of Engineering in 2018 and as a member of the Royal Swedish Academies of Sciences in 2019. Larry’s current research deals with sonar imaging and remote characterization of the seafloor as well as advanced applications of 3-D visualization to ocean mapping problems and applications of mapping to Law of the Sea issues, particularly in the Arctic.