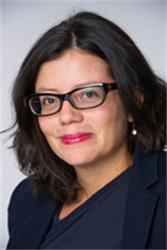 H.E. Janine Coye Felson is a senior diplomat in the Belize foreign service with a wide range of experience in bilateral and multilateral diplomacy. She received her juris doctor from the University of Wisconsin-Madison and her Certificate of Legal Education from the Norman Manley Law School- Jamaica. She is admitted to the State Bar of Wisconsin and the Bar Association of Belize. Ambassador Felson started her diplomatic career in 1998 as legal counsel in the Ministry of Foreign Affairs. She conducted a comprehensive independent research to identify, catalogue and advise on Belize’s international treaties obligations; advised on bilateral treaties relating to trade, transport, labor and cultural exchanges and on Belize’s membership in regional organizations. She also played a key advisory role on the Banana Dispute before the World Trade Organization and on the Belize-Guatemala territorial differendum.

In 2000, Ambassador Felson joined the Permanent Mission of Belize to the United Nations in New York as Minister Counsellor but remained a legal advisor to the Ministry of Foreign Affairs. In 2005, she assumed the role of Charge d’ affaires a.i. with full oversight of the work of the Mission, and its consular section. After three years of distinguished service in this capacity, she was appointed Ambassador. In this position, Ambassador Felson has gained considerable sustainable development expertise. As legal advisor to the Office of the President of the sixth-eighth session of the United Nations General Assembly, she coordinated high level events on the rule of law and development and accountability frameworks for a new sustainable development agenda. More recently, she has served as lead negotiator for the Caribbean Community on the 2030 Agenda for Sustainable Development and continues to serve as lead finance coordinator for the Alliance of Small Island States in the multilateral climate change negotiation process.