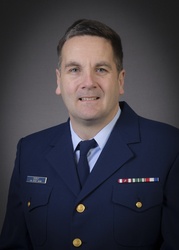 CDR David Dubay is currently the Associate director for the Law of Maritime Operations at the Stockton Center at the U.S Naval War College in Newport, Rhode Island. He previously served as the Deputy Staff Judge Advocate for Coast Guard Pacific Area, where he provided legal advice that enabled mission execution in an area pf responsibility that encompassed 6 continents, 71 countries, and more than 74 square million miles of ocean from the West Coast of the United States to Asia, and from the Arctic to Antarctica. His legal advice covered homeland security, marine safety, international law & law of the sea, environmental law, fisheries, counter-drug, and alien migration interdiction. CDR Dubay has extensive experience in environmental law and environmental civil litigation. From 2011 to 2014, he worked in various positions within the Office of Claims and Litigation, including Deputy Office Chief, at Coast Guard Headquarters in Washington, D.C., where he was responsible for managing all aspects of the Coast Guard’s litigation portfolio, including the Deepwater Horizon civil litigation and cases with over $100 million in potential liabilities. CDR Dubay received his JD from the University of Houston Law Center in 1998 and LL.M. from George Washington University, with highest honors, in 2008.