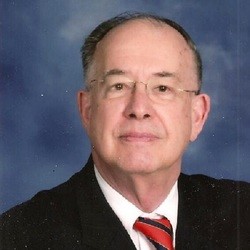 Captain J. Ashley Roach, JAGC, U.S. Navy (retired) is the Visiting Senior Principal Research Fellow in the Ocean Law and Policy Program of the Center for International Law, National University of Singapore. He was an attorney adviser in the Office of the Legal Adviser, U.S. Department of State, from 1988 until he retired at the end of January 2009, responsible for law of the sea matters. He has taught, advised and published extensively on national maritime claims and other law of the sea issues. He has negotiated, and participated in the negotiation of, numerous international agreements involving law of the sea issues.

Since retiring he has concentrated on piracy, Arctic, BBNJ and island-dispute issues. The third edition of his book (with Dr. Robert W. Smith), Excessive Maritime Claims, was published by Nijhoff in August 2012. The fourth edition is in preparation. He chairs the International Law Association Committee on Baselines under the  International Law of the Sea dealing with straight baselines (2013-2018). He received his LL.M. (highest honors in public international law and comparative law) from the George Washington University School of Law in 1971 and his J.D. from the University of Pennsylvania Law School in 1963.