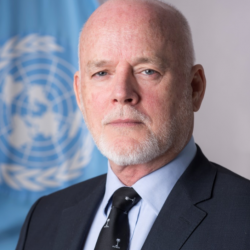 Peter Thomson was appointed UN Secretary-General’s Special Envoy for the Ocean in September 2017. He was president of the 71st session of the UN General Assembly, having served as Fiji’s permanent representative to the UN in New York since 2010. In 2013, he chaired the Group of 77 and China. In 2014, he was President of the Executive Board of the UN Development Programme/UN Population Fund/UN Office for Programme Support. From 1972 to 1987 he worked for the Government of Fiji on rural development and foreign affairs.